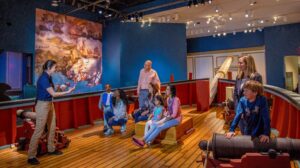 The Museum of the American Revolution has a new program which will be offered on Sunday, August 21st called Revolution Signs: Programs in American Sign Language.